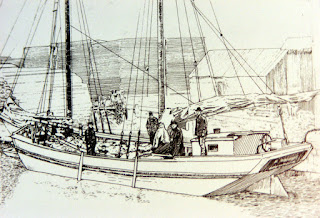 Thanks to the high resolution imagery of the shore line of the Great Lakes taken in 2013 and released by Google Earth in 2016, we can now sit at home and scan the lakes for forgotten shipwrecks. This article will cover the wreck of a little scow-schooner that has been long forgotten- the EUGENE.

Built in 1865 at Fair Haven, Michigan, the EUGENE was just 64 feet long and only 16 feet in beam. Her flat bottom scow hull drew just 4 feet 4 inches of water meaning that she could operate in shallow backwaters where larger boats would normally go aground. On October 22nd, 1890 she was bound from Grindstone City , Michigan to Au Sable, Michigan with a cargo of oats in her hold and her deck stacked high with bales of hay when she was caught in a sudden gale and stripped of her sales and upper masts. Her captain raised a signal of distress as the crew simply waited for the wallowing and overloaded little scow-schooner to be consumed by mighty Lake Huron. Their luck, however, was not that bad as the big passenger steamer INDIA came hissing out of the storm and discovered the EUGENE some 25 miles north of Michigan's thumb. Pulling along side the EUGENE, the INDIA's crew opened a side port and rescued all of the EUGENE's people. No record exists as to how many were aboard the little scow-schooner, but normally it was a crew of between two and four people. The INDIA then resumed her course upbound to Sault Saint Marie where the castaways were put safely ashore.

Meanwhile, the little EUGENE just drifted with the storm until the winds swung around and blew her back toward land. She fetched up on the south end of a spit of land known as the Port Austin Reef. There the little laker broke up in the waves and was later ground to bits by the winter's ice. Today a scan of the Google Earth images shows pieces of her scattered along the reef. Her keel is jack-knifed in two pieces and a large section of her beam lays upon the bottom. There she rests totally forgotten... until now. 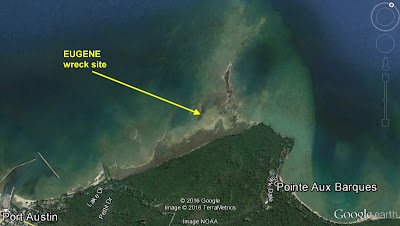 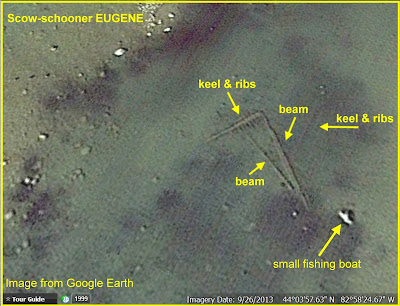 Posted by Wes Oleszewski at 6:18 AM