One technique that I've developed over the years in my writing is what I call "going farther."

(by the way folks- the proper word is "farther" not "further" the word further means to promote... my wife hates it when I correct her on that one... ha.)

What I mean by that is to gather all the details, then look at the smallest of the details and when you think you have all of the questions answered- dig deeper... a lot deeper. Along the way you'll always find a forgotten fact or perhaps even some bad history that has been dittoed over and over again by other historians.

Here is a fun example.

A story that I was working on for my next shipwreck book had one of those tiny details that happened to lead to the little steamship Empire. Of course in my work I cannot simply just name that vessel. I need to go farther and learn all about her. In that process I learned that she was launched in the year 1861... not far enough- go farther... Digging a bit farther I found that she was launched on February 27th, 1861. Okay... but that's not enough... go farther and find out as much as I can about her launching. 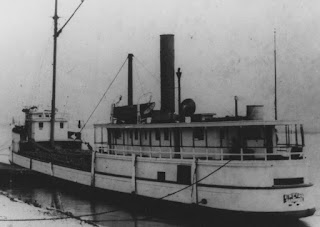 Now, in order to do that I can delve into the old newspapers and read the "Marine Intelligence" sections. But, for time's sake I decided to use one of the best tools that any Great Lakes maritime researcher can use. Walter Lewis' Maritime History of the Great Lakes website... The search there is easy- search by name of the vessel, select the year 1861 from the side menu and command that I want to see the results in order from oldest to newest- so I can get to February faster. BINGO!


THE NEW PROPELLER. - The new propeller built by Quayle & Martin, at Cleveland, for the Northern Transportation Company, is ready for launching, and will probably slide into the water this afternoon. She is to be called the EMPIRE.
Buffalo Commercial Advertiser
February 27, 1861

THE EMPIRE. - The new N.T. Co. propeller EMPIRE was successfully launched from the yard of her builders, Messrs. Quayle & Martin, Cleveland, at 2 o'clock Tuesday afternoon. Her dimensions are- length 150 feet; beam 26 1/2 feet; depth of hold 12 feet. Her tonnage will be about 370. She is a neat, serviceable looking boat. The EMPIRE was yesterday towed up to the Cuyahoga Furnace Works where she will take on her machinery.
Buffalo Commercial Advertiser
February 28, 1861

Notice that all of the modern sources said she was launched on February 27th... but... was that a Tuesday?

Next I pulled out on of my most handy tools used in all of my writing. It came as the back cover of a day-planner and is a little table that allows you to look up any year from 1801 to 2050 and then find out what day of the week any given date fell upon. I use this over and over to add detail to all of my stories.

In this case we see that the Tuesday that saw the launch of the little insignificant steamer was NOT the 27th as all of the modern sources say... rather the boat was actually launched on the 26th of February.

So, how did this happen and how did other researchers get it wrong?

Easy- someone went to that newspaper and read the first blurb which says clearly that the the new lakeboat "...will probably slide into the water this afternoon." and that newspaper is dated the 27th. However, it is very easy to forget that these were the days of hand-set newspapers and not the internet digital media. Thus, the news that is published on the 27th actually reflects what happened, or was scheduled to happen the day before. That's because the reporters needed to turn in the story and then the typesetter needed to put it into the paper which went through the printing press overnight.

Also, others don't go as much farther as I like to.


Posted by Wes Oleszewski at 5:32 PM No comments: