On the first day of June, 2014, Great Lakes maritime history suffered a great loss. Two days later I learned about this sad event by way of the boatnerd.com web site. The event was the death of a reclusive collector of all thing Great Lakes vessel-related who tried to wear the disguise of a crotchety, grumpy old man- his name was Ralph K. Roberts and I was privileged to call him my friend.

I first met Ralph at a maritime festival in Sanilac, Michigan back in the mid-1990s. At the time I was busy signing books when one of the other authors leaned over and gave me a nudge.

"You see that guy over there," he said quietly, pointing toward a gray-haired man in the crowd, "he is THE guy when it comes to photos. That's Ralph Roberts."

After visiting a number of the other tables eventually Ralph found his way to my table. He was quiet and relatively standoffish as he thumbed through my books. Eventually we got talking about sources for photos and Ralph opened up a little bit when we discussed working with certain collections and assorted maritime museums. He began educating me on the ins and outs and who to talk to and who not to talk to. Eventually Ralph offered to give me his contact information. I opened up my little black book in which I kept names and addresses of everybody I met who could possibly help me with my writing, found a spot in the middle of the page and wrote in Ralph's address and phone number. Ralph pointed toward the phone number and said, "Make a note there to don't call often." I dutifully penned in exactly that note.

At some point Ralph asked if writing was what I did for a living. I informed him “no” that it was not my primary job as I was an airline pilot by profession. Suddenly Ralph's demeanor changed. He asked if I had ever flown at Tri-City Airport? I replied that my parent’s house was right off the end of runway 5 and I had worked at the airport as a Falcon Jet mechanic under the shop certificate while working my way through college. Ralph's eyes grew big.

"Do you know Russ Purchase?" He asked as if testing me.

"I took my private pilot checkride with Russ," I replied.

Then he asked me if I knew Bill Crowler, the airframe inspector?

"Bill taught me how to rivet," I replied.

Suddenly Ralph Roberts and I had common ground as it turned out that Ralph held an airframe and powerplant certificate from the FAA and was not only a good mechanic but was also an expert in fabric covered aircraft. Our entire conversation switched from Great Lakes maritime history to aviation. As it turned out we knew a lot of the same people in the aviation business in the mid-Michigan region. I saw a complete transformation in this person who was the enigma named Ralph Roberts. He smiled, we laughed, and we talked aviation. Pretty soon however it became clear that I had other people standing in line waiting for books to be signed and Ralph decided to move along. Just before he walked away, he pointed once again to where I had written his name and address in my black book and the area where it said, "don't call often."

A few months later I was in the Saginaw area doing some research and I gave Ralph a call. As soon as he heard that I was actually in the area, he asked me to come on over and visit. I asked for was okay if my brother came along?

I replied that my brother was okay.

"Alright," Ralph sighed, "you just keep an eye on him."

That was typical Ralph.

His house was a spotless cozy little place on the west side of Saginaw. The room where Ralph had established his "office" was a small bedroom in the house. On one wall was a series of steel shelves that ran the length of the room from floor to ceiling which were absolutely packed with 4-inch-wide black binders. These were Ralph's photos and when he pulled one of those binders out of place it was so packed with pictures that the cover sprang open. It was jaw-dropping and your first impression was to gasp "wow."

I began telling him that I was working on a story about the shipwreck of the OAKLAND and that no photographs of the steamer existed.

"Oh don't go sayin’ that," he said quietly as he reached for one of the binders.

Thumbing through the binder a bit he stopped at one page and there was the single existing photograph of the OAKLAND.

As we went through his photos that day we came upon a picture of the steamer ANDASTE. I commented that was a great shot of the ANDASTE and I had never before seen it from that angle.

"What was her sister ship?" Ralph asked quietly.

"The CHOCTAW," I responded reflexively.

"How can you tell the two apart?" Ralph quickly fired back.

"The ANDASTE had three windows in the front of her pilothouse," I answered again reflexively, "and the CHOCTAW

Ralph just gave a smirk, closed at book of photos and returned it to the shelf. It took a few seconds for what had just happened to sink in to me. Then I looked over at Ralph, put my hands on my hips and said,

That day I brought Ralph a copy of each of my books and then autograph them for him. They went immediately into his collection and I'm not sure if he ever really read them. That's the way it goes with "collectors" if you want to visit them, see their collection, talk about their collection and be welcome to return you must take something in tribute.

As the years went by Ralph and I often exchange letters, he sent me stacks of photographs and when I was in the Saginaw area, I tried to make a point to visit. Those were near magical times when we would sit in that cramped little office with a jewelers loop and study the details of old photographs. Ralph also had a brain full of true stories about people that he knew who had worked Great Lakes. I had occasion to work his stories into my books. He knew captains of vessels and people who had made a career working the lakes. 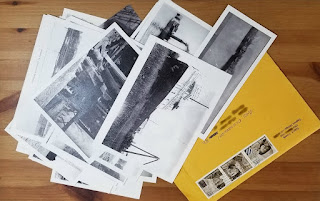 As time went by, we both got older and Ralph even admitted that he was starting to, "slip a bit." On one occasion I was talking to him about my latest book.

"When are you gonna send me the damn thing." Ralph goaded.

Looking over his shoulder I saw that I had sent him the book it was on the shelf right behind him. I stood up took the book off the shelf and said, “here it is!”

"Get the hell otta’ here smart ass." He snarled with a grin.

Along the road of being an author you get the chance to meet a lot of terrific people. Ralph Roberts was someone that I was always proud to boast as being my friend. Now Ralph is gone at the ripe old age of 88 and I cannot help but think that although he assured me, many years ago, that his collection would be very well taken care of, still the Great Lakes maritime community has now lost someone special.

I am also sure that somewhere in the great beyond Ralph is watching as I write this and grumbling that he is going to kick my butt for doing it.

To that I reply, "tough rocks ya’ old fart.”

Posted by Wes Oleszewski at 4:31 PM