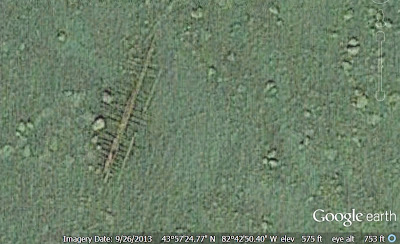 Some of these shallow water wrecks require a good deal of keen-eyed searching in order to find them. When you do it is often only by speculation that you can identify their remains. In the case of the CONSUELO, however, my search required neither of those. I had a few minutes of spare time (a very rare circumstance in my case) between my daily author tasks and picking my kids up at the school bus stop; about 7 minutes to be exact. Being a "creative ADHD" as they shrinks say, I just cannot let time waste away and so I decided to fire up my laptop, call up Google Earth and do some shallow water wreck scanning. I randomly picked an area just north of Port Hope, Michigan on the Lake Huron shore and setting my target on that area and setting the clock back 2013, I zoomed in. THIS is the screen-grab of what I saw as I zoomed in!

Of course it was surprising and exciting and of course I had just enough time to screen-grab and save the image. It would be a couple of days before I could research it. That job would be almost as easy.

Looking at my "list" of Port Hope wrecks I came across one that had a star... the schooner CONSUELO. When I went to my files of the annual reports of the U.S. Life-Saving service for the date of her loss I saw that not only was the whole story there, but I had drawn five stars in the margin and a chevron with the note "L.U." Two and a half decades ago, when I was compiling Xerox copies of the USLSS reports at the USNA's Nimitz Library in Annapolis I would carry a file for a given year along with me as I was commuting to my job as an airline pilot. On those long flights I'd read the reports and mark areas of interest. Two chevrons was my short hand for something good and "L.U." stood for "Look Up" meaning get the details of this vessel's history perhaps for use in a future book. Five stars meant "really good stuff."

(Take note of the big boulder sticking through the beams.)

The wreck's keelson and beams are located just over 1,200 feet from shore and 8.26 miles north, northwest of the Sand Beach (now Harbor Beach) 1888 Life-Saving station. The two-masted schooner was 103 feet long and loaded with lumber from False Presque Isle to Detroit under the command of Captain Seeley. On the evening of November 9th, 1887 a southeast gale was blowing and the schooner was tacking against the wind. She had sprung a leak in the storm and while running for the safety of Port Hope found herself too close to the shore and the boulders as she ran aground. At 2 o'clock the following afternoon a telegram was sent from Port Hope to the Sand Beach life-savers stating that the vessel was in peril and that a steam tug had been summoned from Detroit to help free her. That tug would pick up the life-savers and their life-boat and tow them to the scene of the stranding. They arrived at 7:30 in the evening. It was decided that nothing could be done with the CONSUELO until daylight. Then, at 8:30 in the evening, the waves began to break over the boat and her crew of six grabbed their belongings and asked the life-savers row them to dry land. For the next four days the lifesavers worked at lightering her cargo of lumber in an effort to re-float her. It was no use as an inspection of her hull showed that a huge boulder was jutting through her bottom. All of her lumber was dumped overboard and collected by the life-savers and turned over to the owners. After five days of hard labor by the life-savers the CONSUELO was left to the lake which rapidly took her apart. Built in 1851, her old timbers were easy for Lake Huron to feast upon. The keeper of the Sand Beach life-saving station estimated that the wreck was "about 9 miles northwest of the station." That is almost exactly where these remains are located.

Yet there is another object... 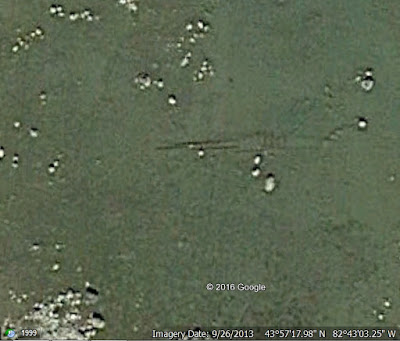 In using Google Earth you can look carefully and spot this second object close to shore and 1,154 feet from the wreck site. 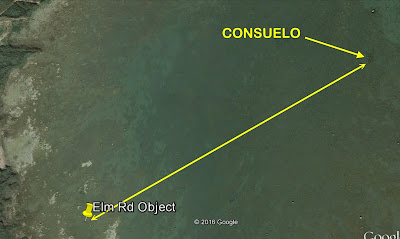 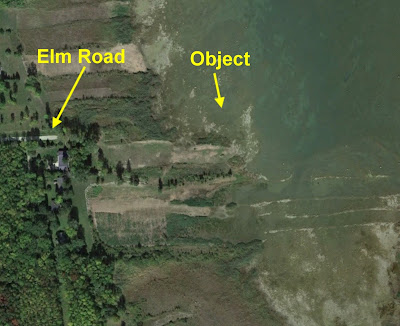 The object appears to be some sort of wreck piece, but without actually visiting the site and checking it out, it's impossible to say for sure that this is a part of a shipwreck. However, considering that the USLSS places the CONSUELO at this location, nearly exactly, I'd say we're pretty safe in saying that the remains out on the shoal is probably her- especially with the huge boulder stuck in her ribs.