PAINT WITH A HISTORY

Way back on December 16, 1985 the Huron Cement carrier S.T. CRAPO was the last boat of the season to come up the Saginaw River and as luck would have it, I had just gotten back home from college in Florida the day before. I got down to the dock at Carrollton’s sixth street that evening and was welcomed aboard by her first mate Don Ghiata who was supervising the unloading. Normally he served as a captain of Huron’s boats, but the slowdown in cement powder demand had him working as a first mate as the 1985 season ended. Thus, my Christmas break got off to a good start with a tour of the CRAPO.
Along the way Captain Ghiata and I talked about everything from trimming the cement load to layering your clothing to stay warm while out on the deck. As we moved around the boat, he noticed that I was taking a lot of photos from off angles and close-ups of quite ordinary things. When he asked about that I said that the pictures were for modeling and I was considering doing a model of the CRAPO. I told him how many boats I had in my current fleet that building model boats from scratch was a healthy distraction from flying. Captain Ghiata asked if I ever sold any? I told him that I was a student working my way through college and I’d sell anything except my bicycle. He said he’d like me to build him a model. When I said I would be happy to do that for him, he ordered the JOHN W. BOARDMAN. That was great for me because the previous summer I’d been in a Bay City antique mall and had bought a 50 year anniversary book, “The Huron Heritage 1907-1957” and it had a couple of great photos of the BOARDMAN for me to work from. He offered to buy that too… I declined. My list of not for sale stuff now included my bicycle and that book.

It was a happy trip for the crew of the CRAPO because their season was coming to an end. The only question was if the Saginaw River was going to freeze them in. The ice was about five inches thick that evening and there was no sign of a thaw coming until spring.

At the time of my visit in December of 1985 the CRAPO was still a hand-fired coal burner and was known for her occasional bursts of heavy black smoke. One summer morning as she was coming through the Zilwaukee Bridge she let go with a belch of black smoke and as she passed a group of us boatnerds the mate came out of the pilothouse and shouted “Sorry about the smoke!” Someone shouted back, “We want more black smoke for the cameras!” Eventually in the winter of 1994-1995 she converted to an oil burner.

Through her entire career the CRAPO was powered by a triple expansion three cylinder steam engine that produced 1,800 indicated horsepower. Steam was provided three Scotch boilers.

Unloading the cement powder that night the CRAPO used a system that was her original design. It used four tunnel conveyors with no air-slides and was unloading about to 500 tons of cement powder during that single hour that I was aboard her. She had a maximum carrying capacity of 8,899 tons at her mid-summer draft which was carried in six holds.

Having been only the second lakeboat designed and constructed from the keel up as a self-unloading cement carrier, the CRAPO took a back seat to her fleetmate, the BOARDMAN. No wonder Captain Ghiata wanted his model to be the JOHN W. BOARDMAN… she was the first of her kind.

Six months after I’d said goodbye to Captain Ghiata and the CRAPO I’d knocked off another semester of college plus a multi-engine aircraft rating while down in Daytona and was back home up home in Michigan for another summer of minimum wage toil and boat watching. The first thing that I did when I got back was go to work on Captain Ghiata’s model. Since he wanted just a display model and not a powered R/C boat the work went ahead quite quickly. Alongside his boat I was converting one of my other boats into a J.B. FORD. When he had originally ordered his model I asked Captain Ghiata if he wanted his boat painted in Huron Cement off-white hull color, or if he wanted the original caboose green? He was firm that he wanted her in green! Thus by mid June of 1986, Captain Ghiata’s model was finished and looking good in the original Huron Cement green livery.

On June 21 of that same summer the E.M. Ford arrived at Carrollton after making an all-night passage up the Saginaw River. It was a fairly chilly morning as I met her at the dock and waited for the crew to swing the gangway to her deck.

Her master that season was Captain Ghiata and as I went aboard I had with me his model of the BOARDMAN plus my model of the FORD. I met the captain and we headed down to the FORD’s guest lounge.

Captain Ghiata was tired from the night’s passage up the river, but overjoyed with his BOARDMAN when I took her from the carrying case.


I watched timidly as he examined every detail of his new model. “Beautiful,” he said as he looked her over, “just beautiful.” 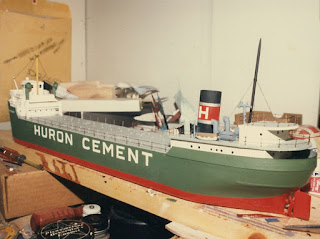 He popped his checkbook out and asked me to remind him of how much we’d agreed upon for the model? I told him and he shook his head and said, “For work like this, that’s not nearly enough.” Then he made out his check for double the amount we’d agreed upon! One of the mates had just come on watch and the captain showed off his new model to him as well as one of the deckhands..

It was about then that I showed them my LEWIS G. HARRIMAN.

Captain Ghiata gave a deep scoff and said that the off-white color was all wrong! I told him that it was nearly impossible to mix that color and get it right. You look at photos and depending on the type of film or developing process that dang color is never the same as when you see the actual boat. I wished that I had a chip of the actual paint off of the E.M. FORD. In a heartbeat he turned to the deckhand and said, “Go on down to the galley and get a couple of empty jars and then go to the paint room and get Wes here a couple of jars of our hull paint.” The deck hand smiled and said, “Sure, right away cap.” Then the captain said he was beat from bringin’ his boat all the way up the river and said he had to go to his room and catch some sleep. Before he left he patted me on the shoulder, thanked me again and said, “Take yer’ camera and go where ever you want, you know yer’ way around a boat.”

And that is exactly what I did!

When I returned from my photographic excursion around the oldest vessel on the Great Lakes, there resting next to my J.B. FORD model were two, pint jars of actual Huron Cement off-white paint! I used the first jar to repaint two of my models and then doled out its remaining contents into small ¼ oz Testor’s jars for safe keeping and later use. That came in handy when, in 1990, I built the ALPENA.

The second jar of Huron-Cement off-white paint, however, sat on a shelf, unopened for nearly 34 years! Of course every now and then I’d look at it and get the urge to give it a good shake. Sure enough, it still shook, every time!

Recently, at the ripe old age of 62 I looked at that jar and it struck me that I am never gonna use all of that. Yet there it sits- real Huron Cement off-white paint gotten from a historic lakeboat which herself is now long gone to scrap. If I croak tomorrow, my wife is just gonna throw it out. However, there are other boatnerds and model makers out there who would really appreciate a jar of that stuff. Initially I thought I’d put the whole jar on e-bay and let people bid themselves into the stratosphere over it. After all, it’s rare and never been opened. Yet, greed is not a part of me- never has been. So, first I decided to open the jar and if the contents still behaved like usable paint, I’d separate it all out into smaller jars and spread it around on e-bay for others obtain and use.

On January 24, 2020, I opened the jar… okay, I worked at opening the jar. It’s lid was painted shut and I was afraid if I torqued it too much the glass may shatter. The process required the use of a marlinespike on an antique knife that I have, which also has a very old manual can opener on it. I spiked two holes in jar lid and then poured out the well-shaken contents. Thereafter, I used the can opener to rip open the lid thus allowing me to scoop out the thicker contents of the jar. Some thinning was required, but once I had the paint in a reasonable thickness I did a test brushing on one of my abandon model hulls. It spread nicely, but I was suddenly reminded of what I’d forgotten since 1990… this AIN’T Testor’s model paint folks! It is real ship’s hull paint. The stuff takes about 48 hours to dry to the touch and another 24 hours to get securely dry. But, it is still good.

Now I have it portioned out into 10 jars of ½ ounce capacity. I kept one small baby food sized jar for myself, but everything else is going on e-bay. I don’t know who may want it, but this at least, gives me a chance to share it with others. I’m sure you can ask someone from Inland Lakes Management, or the ALPENA to get you a jar for their off-white paint- but this paint is from the E.M. FORD, and this paint has a history.

Plus it’s better than having my wife throw the whole thing out after I croak.